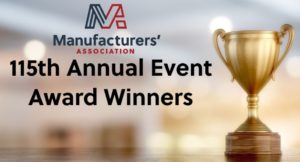 The Manufacturing Innovator award was presented to Trola Industries of York, PA, for its investment in research and development and new product design. Trola invested over $520,000 in R&D and capital investment over the past year – including a new on-site lab for prototypes and new tech demos.  A family business established in 1970, Trola Industries employs 25 and has become a leader in “Industry 4.0”.  The company recently celebrated its 50th Anniversary and is transitioning to its 4th generation of ownership dating back to 1922!

The PA Department of Labor, Office of Apprenticeship & Training received the Partner of the Year award for their commitment to working with the Association to improve the manufacturing community. The PA Apprenticeship Office has been a champion of promoting and expanding apprenticeships across Pennsylvania, which now has over 17,000 active apprentices in the state! The team at the state office has supported The Manufacturers’ Association in developing 8 different trades to support our membership, including the state’s first 4-year Robotics Automation Apprenticeship in PA that we announced in April.  Deputy Secretary Sheila Ireland and Apprenticeship Office Director Tara Loew accepted the award on behalf of the Department and Office.

Wolfgang Confectioners, a 100-year-old candy manufacturer, received the Manufacturer of the Year award. This year Wolfgang announced an investment of more than $3.5 million in a building expansion, which will add another production line, and will add nearly 100 more new jobs. In the past few years Wolfgang has built a new factory, expanded four production lines and has grown from 19 full time employees to over 400 full time employees.  Accepting on behalf of Wolfgang Confectioners was Michelle Finch, Director of Operations.