Pioneer and manufacturing legend Donald C. Graham, founder of the Graham Group of companies including Graham Packaging, Graham Engineering, Graham Architectural & Graham Capital, accepted the Manufacturing Trailblazer award. This award recognizes the historic role of individual’s contributions to regional manufacturing. Mr. Graham started his first company in 1960 in a farmhouse with 2 employees and now oversees $7 Billion in assets through Graham Capital and other related businesses. Over his long career Graham has been recognized by the industry with a Lifetime Achievement Award from the Society of Plastics Engineers and his election to the US Plastics Hall of Fame. Donald Graham served as the Association’s President in 1974 and is a leading philanthropist in the community supporting York College, Penn State York, the YMCA, and many others.

The Manufacturing Innovator award was presented to Weldon Solutions an Employee-Owned Company, located in York, whose roots can be traced back to the 1890’s. Weldon Solutions, a recognized industry innovator, is a manufacturer of grinding equipment and a leader in robotic integration. Last year the company achieved a record number of automation projects for customers and a record number of FANUC Robotics sales. The company’s new process development innovations included a novel robotic gluing process, a new grinding machine for the microchip industry and deployment robotic simulation software. The company is growing its business through a 21,000 square foot building addition to expand its production and R&D space. Travis Gentzler, President, accepted the award for Weldon Solutions.

The Partnership of Career Development (PCD), located in Cumberland County, received the Partner of the Year award for their commitment to working with the Association to improve the manufacturing community. For the past 27 years, PCD has been providing career education and exploration opportunities to thousands of students and teachers in the Capital Region. In partnership with the Association, PCD created a manufacturing specific career portal that reached over 2,000 students in the first few months and has been an integral partner for the Association in expanding its Pre-Apprenticeship program for high school students. CEO, Lynda Morris, accepted the award on behalf of PCD.

SCHOTT North America was presented with the Manufacturer of the Year award for their contribution to the local economy. SCHOTT, employing over 300 at the plant, has manufactured glass pharmaceutical vials since 2004 in Lebanon County. Last year the company made a multi-million-dollar investment to triple its manufacturing capacity to meet the need for 5 billion COVID Vaccine doses. This demand led to a record year for the company. SCHOTT vials are being used in 75% of all COVID-19 vaccine projects and every second, 20 people from around the world receive medicine from a container produced by SCHOTT.  As an Association member SCHOTT has also invested significant resources in leadership training through the Association for their employees. Vice President, Chris Cassidy, accepted the award.

The Community Investor award was presented to The Central PA Chamber, founded in 1906 and headquartered in Milton, PA. The Chamber supports 563 members covering five counties and has worked to establish a tax-free Keystone Opportunity Zone to attract and retain businesses. They also support 28 non-profit organizations and created a Kindness Campaign to support the community. TeaJay Aikey, President & CEO, accepted the award for the Chamber. 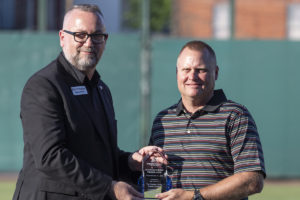 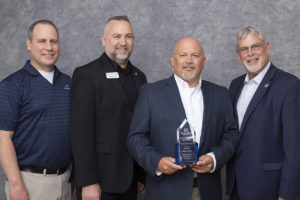 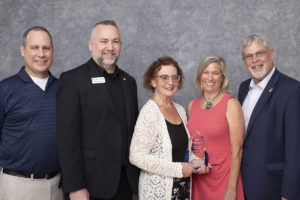 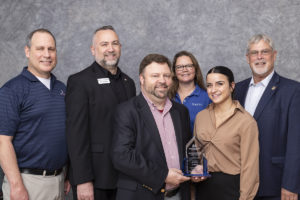 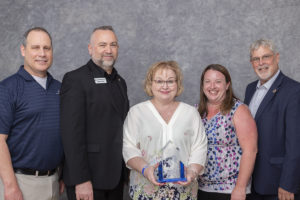